Thank you Sir!!! Works perfect. By the way, I am using this on Hubitat, not ST.

And now I have what I really want. Push removed and Sonos added in. So happy, thanks again.

Hey all - first to @bthrock THANK YOU SO MUCH for doing this work and posting it so us lay-people can do some fun stuff.

I have copied your code exactly, have only set it up for my devices. Everything seems to work, except I am getting no notifications. I read in other spots that the new ST app requires the messate to also store in messages; however neither is happening. I have also attempted to send an SMS to no avail.

Are there any guess from anybody about what noob thing I’m doing wrong here? 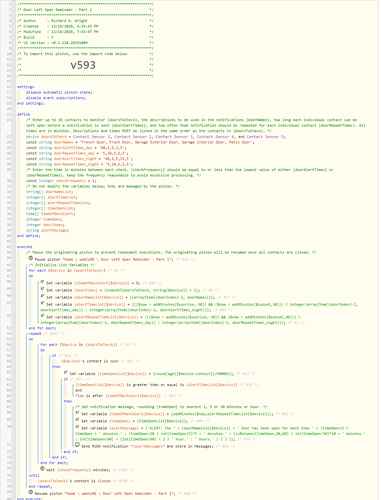 Nothing stands out at first glance. I’d turn on logging, open a door or two, and observe the piston with Trace enabled to ensure that both pistons #1 and #2 are functioning as intended, with Piston #2 running up to and through the notification statement and the {alertMessage} variable being populated.

If you’re still having trouble I’ll take a closer look when I’m back at my desk.

Are you using ST or Hubitat?

I really appreciate it…im not 100% sure what im looking at in the logger, but by paying attention to the timer loops, it appears to me that it is catching the door being open, counts down the time appropriately (1 minute for testing), loops back to recount when the sensor remains open, and resets piston A when the sensor is closed. To my lay-person eyes, it seems to be doing everything right, short of popping the notification…

Try adding another form of notification, such as SMS or E-mail (or both), if only to narrow down the issue a little. You could also delete and re-add the existing PUSH notification just in case there’s corruption in that line of the piston (very unlikely, but stranger things have happened).

I’ve been trying to add logic to announce when one of the door’s is Closed. Something like “Thank you for closing the Front Door”. But, I have not been able to do this successfully.

Can anyone help me out it adding salutations for door closures?

depends on whether they have ST or Hubitat. Echo Speaks does not work with ST.

Yes, I have HE and Echo-speaks. Its not the actual speaking which is eluding me, it’s the control to determine when the door closes and which door closes and to take action in piston when door closes.

To accomplish what you’re suggesting without triggers would be complicated and require the use of conditions (and additional variables and code) within the loop to determine when a door that was previously open “too long” was closed. Even if this were done, any such notification could be delayed by several minutes because the loop is timer-based. You could shorten that timer, but then the loop could be running near constantly for extended periods of time, which isn’t something I encourage.

I’m not saying it can’t be done; I am saying that it’s not a simple matter, and you’re not likely to get a quick answer. As the OP, I might be able to look at this further and offer some suggestions, but at the moment I have too many other more pressing projects in front of me, especially given ST’s plan to deprecate the groovy platform in the near future.