After seeing a few posts on here & on the Plex forums, as a keen Plex user, I thought I’d look into using the Plex webhook with webcore.
I made three steps in my journey as follows and thought I’d document for others. I hope people find it useful.

1. Recieving Information from Plex.
Plex allows you to setup a webhook which is called when the Plex media server performs certain actions, e,g media play,pause,resume, media add etc To use this you simply put the url of a piston into the webhook setting on Plex. More details are available from plex https://support.plex.tv/articles/115002267687-webhooks/

To access the data when the webhook is called the piston should set values as shown below. Note this does not cover all values, I actually found the Plex documentation doesn’t cover everything sent, including a show/film summary which I used in my piston

2. Dealing with known problems between Plex & webcore
There is an issues with some webhook calls e.g media.play, media.add. These send a multipart message with the second part of the message holding a jpeg thumbnail of the film/show. Webcore can not handle this request, as a result an error 500 is returned to Plex, and the piston never runs. Media.play is probably an event you would be interested in, as you can use it to set lights to “film mode” lower projector screens and blinds etc.

As a solution to this, I wrote a node.js app which I run on a raspberry Pi. To use the app, the plex webhook should be pointed to the app (http://raspPi IP:1111), rather than the piston url, and the line in the app which calls webcore should be changed to your original piston. The app will then receive the original message from Plex, and strip off the second part of the multipart message before passing it on to webcore. As the data is sent in the same format, you can use the same piston code directly from Plex or via the app. I’ve also submitted an enhancement request to plex asking for the option to not send the second part of the multipart message.
https://forums.plex.tv/t/webhooks-option-to-not-send-jpeg-image/573444
The output of the script is also useful as it shows all the data items available which maybe of interest. I’ve also left in commented out code which can be used to remove anything you do not went to forward to webcore.

3. My final piston, including control of the Plex player
As a fun demonstration I wrote a piston to read out via my sonos details of the TV show we were about to watch. while this worked well, the message would talk over the start of the show, so I needed a way to pause until the message had played and then resume. The solution to this is shown in the piston below, and includes the ability to start & resume playback from webcore, which has other possibilities too. (e.g pausing if the doorbell rings)

Obtain your player address
From a browser enter http://media server ip:32400/clients?X-Plex-Token=******
You may need the player to be active at the time, you will then see an entry for each player as below

copy the address, port into the piston, and use the machineIdentifier above as the X-Plex-Target-Client-Identifier value 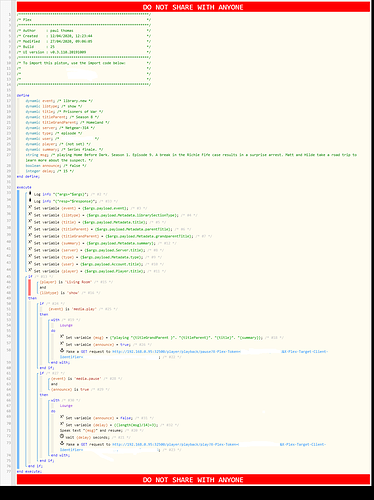 Outstanding Issues
The media.play request doesn’t always seem to be sent by Plex, I think this is a Plex issue and have reported it on the Plex forum

Beautiful write-up, @Paul1964! Thanks for sharing…

FYI You can strip off the jpeg using a free hookdeck.com account. No Rasberry Pi needed,
Create a generic text link using the Webcore external URL link as a destination. Then put the generated hookdeck link into Plex. Once you have that…hit Plex a time or 2 to send a request through hookdeck. Then edit the connection in hookdeck adding a " Transformation" with this code:

This looks a good solution, however I’m having trouble eating it up.
When I try to create the transformation rule, the save button is greyed out. When I first go in, its active, but as soon as I start typing anything it greys out. I pasted your code in, but can’t save it.

Any idea what I’m doing wrong?

I’ve managed to sort it.
You have to name the rule (top left)
Think you also have to run the rule, and it has to complete successfully before you can save. You also need valid data to test against, so you have to trigger the rule to obtain the test data.