cool. humidity is now included in the app and can be used to trigger rules. I will probably push to repo today/tomorrow.

any of you on twiiter? if yes please consider retweeting/loving this one to spread the word:

if you use @smartthings please give my smartapp a try: https://t.co/FYp7AEzMGI github: https://t.co/gjMo2VIipR lets you manage your rooms occupancy & conditional actions on room devices based on occupancy in single app. its open source & free ... just my 120% fun time project ;-)

@bangali I have been away for a while and i’ve seen you did alot! Still using this every day and still working good (sometimes some hickups but haven’t researched them yet). Keep it up!

hey man yeah havent seen you in a while. thats awesome!

sometimes some hickups but haven’t researched them yet

when those happen file an issue on github so we can track. i am focusing on docs (and any edge case bugs) from here.

heres a partial view of the icons. btw the icon against the room name is user customizable 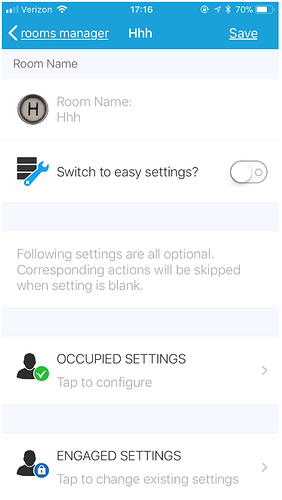 Trying to find the issue of inconsistency but seeing all the issues that ST is having, its probably ST… Really thinking about switching to a platform that has all the basics offline…

thats been my experience as well.

I was looking at hass for myself but a little hesitant because most users may not be comfortable with it.

also playing with hubitat. they have some ways to go. but if they can deliver on the promise its likely to work for most users.

Anyway to get it to recognize google home relay speakers for announcement?

does ST see these as speakers?

not sure, but think so.

then in the announcement section and see if the speaker is available to select there.

UPDATE: updated version 0.20.0 to github with the following changes:

changed ‘/’ to be used as the string separator instead of ‘|’. so in rooms manager you will need to update your strings like person names, welcome come greetings etc. also removed ^ and # replaced with &is and &has. here is the correctly formatted greeting/announcement strings as posted on another thread by @borristhecat:

hows that master bathroom looking these days? humidity sensor working as it should?

Hows the port of Rooms Manager to HE going

can you remove the contact sensor requirement for presence announcement?