I recently replaced my ADT system with a SmartThings based system and had been looking for a way to get entry delay notifications with the SHM system. This is my setup:

With the above setup I tried using BigTalker and LANnouncer, but the Tablets I am running with ActionTiles were too wimpy to run the background LANnouncer apps consistently. This meant that when someone entered the house with SHM Armed they may, or may not, get an announcement letting them know the alarm was Armed, until the alarm went off. I needed something that was a bit more reliable for my setup.

I started investigating Alexa routines and found that I can trigger an Alexa routine with a contact sensor, and found that I can do the same with Simulated Contact sensors. I tried to build a webCore app that would loop through until the alarm was disabled, but I couldn’t figure out the logic. Luckily I found a webCore app by Bruce Young (oc2hi) that was a perfect starting point for me.

In addition to the above items you will need to create 2 Simulated Contact sensors and grant Alexa access to them. Simulated Contact sensor 1 is used in the first Alexa routine to make the “Please disable the alarm system” announcement, and the second is used to make the “The alarm system has been disabled” announcement. Here’s the webCore app I’m using to accomplish this: 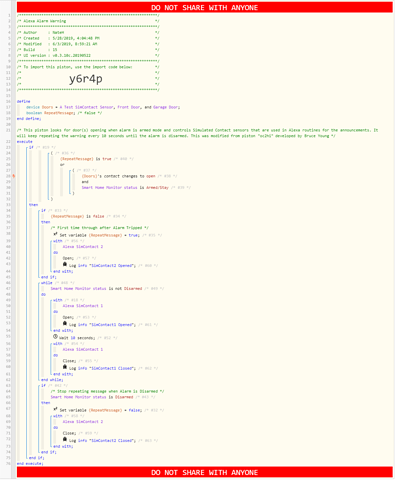 And here are the two Alexa routines for the announcements. One is a standard voice routine and the other is an announcement routine. The difference is that with the Announce routine there is a chime ahead of what Alexa will say. I only used that for the final announcement, purely as a preference.

So this works in tandem with, but not coordinated with, the SHM Delay Smartapp. The SHM Delay smartapp is used to create a delay in the SHM Alarm once a selected sensor has been opened. In my case I have a 90 second delay before SHM will trigger the alarm. During that time Alexa is saying “Please disable the alarm system”. For me this has been pretty rock solid, it does not rely on the bluetooth setup I saw some people using, but it does rely on the internet working. I initially thought this was an issue, but realized pretty much the entire ST environment relies on the same thing. Worst case scenario will be the alarm sounds without an Alexa warning.

The Log entries in the code and the “A Test SimContact Sensor” are used for troubleshooting only, and are not required. Hope this helps someone out there!

Do you mind sharing this script? y6r4p is returning an error. thanks

@NateH, the green snapshot is the image that is sharable…

@NateH yes is you could please share i am using my laptop with VLC media and I hate leaving my laptop on all the time for it to work. This would be a very quick replacement of it.