Something has gone wrong with CoRE in SmartThings app.

I did have a version that let me have a code for https://dashboard.webcore.co/register
But now it’s gone back to the one I had before that doesn’t give me a code.

I did try to Update the master but all I get is " smartapps/ady624/core.src/core.groovy" which I already got
installed.

This is the wiki I ma following http://thingsthataresmart.wiki/index.php?title=CoRE#GitHub_Installation

I would like to know why it has changed and how do I get back the version that gives a code?
I am really sorry about this.

You are confusing the apps - the dashboard URL belongs to webCoRE, the app you talk of is CoRE - they are two different apps - which one do you mean to use?

In the phone app I got a code to use webCore . Now I don’t get a code. See picture in other post.

Like if I want to go here https://dashboard.webcore.co/register I need the code off the phone app.
I was able to get a code, but as of today I don’t.

Ok, you are confusing CoRE and webCoRE - CoRE is the older, non-web app that has no such thing as a registration code. The screenshot is of CoRE. You need to install and open the webCoRE app, it looks like this: 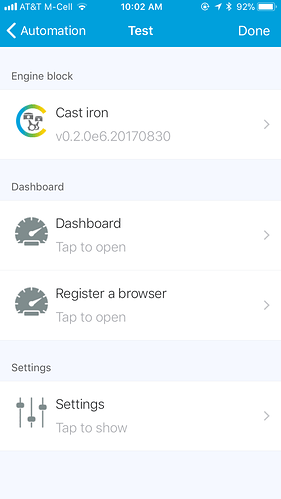 If you look at the picture I linked I don’t have those options.

The official wiki for webCoRE, the Web-enabled Community's own Rule Engine SmartApp

You are confusing two similarly named SmartApps with each other. The version you screen shot is the older CoRE. The forum you are now on is for the newer different version of webCoRE.

That worked. Thank you.
I have booked marked it just in case.
Sorry about all the fuss…

I’m curious if there are plans to update the HTML and CSS for webCoRE? Something in the realm of Material Design would be really cool to see.

Edit: @ady624 @RobinWinbourne … just tagging in case this was missed?

great video. as not having coded since university, it helps to refresh your knowledge

I’m not sure what you mean?

What is material design?

@RobinWinbourne He’s talking about the site design. “Material Design” is an discourse theme.

@acdown87 we are not adding Material Design to the WC community. I did early on and then removed it. The Minions decided against using it.
(Btw, ADY doesn’t do the forum site day to day stuff. The minions handle it so as not to put the mundane stuff on his plate. He has rules engine stuff to work on

That said, @ipaterson is in the middle of designing a site theme from scratch, custom for this site. It’s been in the works for a bit, and he’s cooking up something really cool. Again, custom for the WC forum. However, he’s not getting a salary for this, he is doing it in his off time, so your patience for his awesomeness is greatly appreciated

Wait, you’re not talking about the Material design discourse template are you?

Awesome! Sounds great. And all the patience you need. Just saw you post about the redesign somewhere and couldn’t more info on it.

If you guys need any help, let me know.

I’m just talking about the concept of material design… the design aspects of the HTML5/CSS etc that is utilized. It just looks nice and clean.

Ah I posted the wrong URL. This is what I had meant to post: