1) Give a description of the problem
My piston announces on Google Home that the garage light is on (via Assistant Relay on a Raspberry Pi.) The piston works fine but the json post requires a ‘command, user, and broadcast’. I can define the command text for the ON (The Garage Light is On) but how do you define a second “command” variable for the OFF (The Garage Light is Off)? I’ve tried “command 2” or similar but json doesn’t understand anything but “command”, however I don’t think you can have two variables named the same thing.

2) What is the expected behaviour?
The piston should have a second command that sends the OFF command text (ie what Google Assistant should say when the action happens…The Garage Light is Off)

3) What is happening/not happening?
The ON command works perfectly for the ON but I need help with the second part for the OFF command text. How do you define a second command variable? 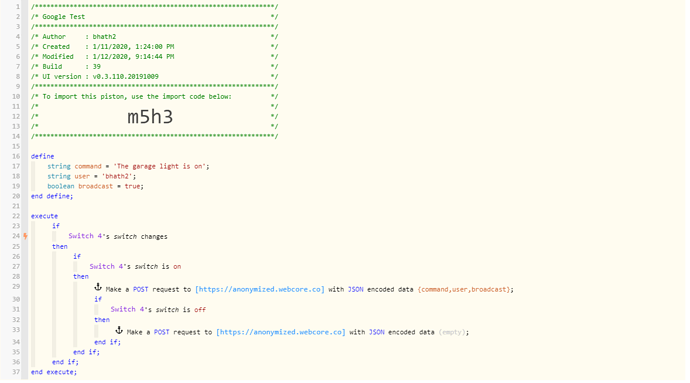 Can you have two variables?

And use two IF’s as @WCmore has suggested.

If you cannot use two variables, then maybe

Thanks @WCmore and @Pantheon! That did it and it’s working now! Both of your hints put me on the right track. Really appreciate it! Here’s where I ended up: 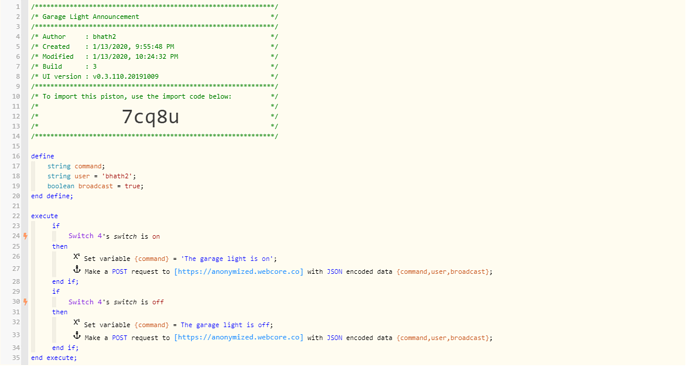 My apologies… It just dawned on me that your original question was:
“How do you define a second “command” variable?”

I guess I fell down the rabbit hole on that one…

Thanks @Pantheon for keeping on track!