Attribute "Price" for power in SA or DH

Not sure if any device handler uses this, and/or if it is available in WebCoRE.
If a custom, Device Handler would have a attribute containing the price for power.
This could be usefull for controlling things using power.
Is this value available anywhere?
@ady624 you know for sure, but there might be answers in the forum also

Reason for asking is that i am looking into fetching price pr kwh from a vendor dynamically.

Are you trying to deal with things like variable pricing for peak hours, holidays, etc or just a flat price per kWh? Is your power deregulated with separate companies and pricing for supplier and distributor?

Seems like a useful thing to track in a global variable if you can set up a piston to get the value from a web site or API. Maybe someone has seen a DTH that is capable of this, but that seems like a stretch if you have numerous kinds of power metering devices.

I’m not sure what other questions to ask for you in Norway, US perspective here

Thank you.
I am looking into a vendor that gives me variable prices throug the day.
So if a smart app could sync the price pr kwh into a device that webcore could use.
I could alarm on high prices, and even turn things on/off regarding to the pricetag.

Was just browsing and, for whatever reason, stumbled into this…

I think you have a few possible pistons that need to be developed to achieve this:

The first 2 questions are critical. The 3rd question might be a bit more subjective.

Pulling in @Cozdabuch who uses a piston to control air conditioning for off-peak savings.

Do you have a feed you can gather the current price from? Is it something that can be accessed via an API or web service? If not - I fear this is all just an academic discussion. If you are having to constantly update the price manually - it defeats the point.

First Thanks a lot for looking into this.
Here in Norway we have a new system that gives us different price depending on the demand through the day.
Our meter reports in each hour
So let’s say, at 5 pm when people starts heating houses, preparing food and charge their car the price will be high, and mid-day/night the price will be low.
My new vendor gives me the real time price in a way that I can fetch through a API on their site.
https://developer.tibber.com/
If I then could fill that price into av virtual device from a Smart app i could use this flexible in WebCoRE was my thoughts.

@bangali are the rates published? Or do the rates and times change at the power company’s discretion?

Mine is a handful of rates that vary by time of day and day of week. But the rates during those times don’t change.

Mine are as follows:

So I have hvac related stuff happen at certain times. Same with electric car charging based on lowest rates. But it checks holiday or weekend daily and sets an override variable that doesn’t run the scheduled tasks on those days, and if no override it runs stuff based on time period

If your rate changes at random my examples won’t help. If your rate is scheduled to change/rotate at certain times, it certainly will.

Dynamic and powered by a bot.
Price in Norwegian currency of course

I really don’t beleive you need a SmartApp to get the price data. WebCoRE can make a web request and get the pricing data for you (assuming a standardized response like JSON or something parseable) which you can store in variables.

Here’s some pseudo-code for you to consider:

See - no SmartApp. WebCoRE is all you need.

Thx a bunch!!!
I still think that Tibber might want to exchange data in between their system and ST through a SA/DH
But this is all helpfull when i go into discusions with Tibber (power sales company) in a few days.

Are you planning on commercializing this effort? If so, then yes I would agree, a SA/DH is probably the way to go. I’m also not sure you could use WebCoRE for commercial purposes anyway. If for personal-use, I’m not sure they would care AND a SA/DH is going to be far more complex.

I am just a customer of their power sales service, and I would love to se them integrate with Smartthings.
But I am a bit of a fan of WebCoRe

so I would love to be able to use the “price” as an attribute in WebCoRE.
I doubt they will go for a solution purely based on WebCoRE, but I will discuss with them in a few days.
So my questions is more to be prepared when i will talk Smartthings with them.

Wow.
Well if you can pull the rate into a local variable, have the piston run comparisons between rate and set 3-4 price brackets for your high energy draw items via pistons.

When Variable changes, set global variable to same value
(I’m only suggesting keeping a local variable too Incase you want to use it further within the piston, if not just have all the ifs set global)

Take your HVAC piston for example
Obviously you can break it down by awake/sleep modes, outside temps, home vs away, triggers for coming or going, but for the sake of this I’m just being super simple.

I’m not sure you understand the implications of writing a SA/DH just to get data from an API. I also don’t think the power company / API provider will care what platform you are pulling their data into UNLESS you are doing it for commercial gain.

In any event, good luck!

this would be fairly easy to do assuming you already know your rate code if the power companies provide an api to poll for the reading and rate data.

So @jeffh0821 is this something I could do as a GET (Total) ? as long as i got the token?
Major ditance away from my line of work

Give me an router, firewall, switch and we will talk about it… hehe

Based on that data after doing the GET request you would access the total value using an expression based on $response.*, like this:

And tring to make a piston with the folowing as input.
Cant seme to save this as a variable, some syntax error.
The piston is NO share, Yeah i know, but this i a demo thingy

This is the input i cant save:
Data : { “query”: “{viewer {homes {currentSubscription {priceInfo {current {total energy tax startsAt }}}}}}” }
Any idea? 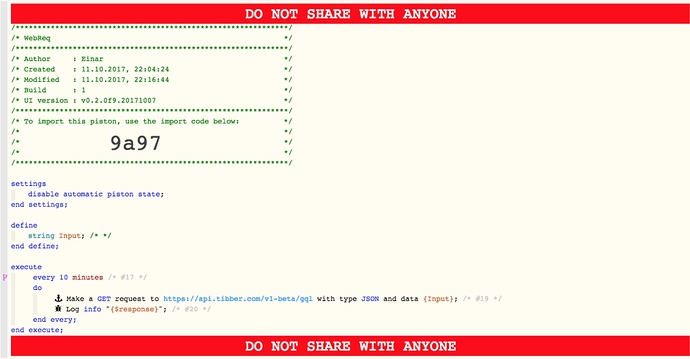 It looks like you will need a string variable named query with the value \{viewer \{homes \{currentSubscription \{priceInfo \{current \{total energy tax startsAt \}\}\}\}\}\} where the backslashes stop webCoRE from trying to pick out expressions. You can provide that query variable in the data for the request, then the token (including “Bearer”) in the authorization header input.

YOU DA MAN!!!
Works.
I am realy thankfull.
And yeah, I would never share anything with my own info.
I got a demo token from the vendor to test things, but anonymous piston kinda removed my url so i might have errors in that also.
Next up to get values into different variables.
Once again, thank you!!!