How long will WebCoRE be available

The webCoRE portions are quick

Very quick, but was still good to see the commitment to the future

Amazing! Can’t wait to see how it progresses.

Local execution - this will become a thing. Not on day one, but eventually - one of the main issues stopping local execution as it pertains to Groovy is that the hub is not the perfect environment for a heavy Groovy/Java environment which means SmartApps and DTHs could not run on hubs. We’re writing the Rules API in a language that natively runs on the hub, so we’ll get it running on the hub eventually. This means that rules will run locally assuming you’re only using devices that support local execution. And that list is getting larger.

@ady624 - Awesome news on expanding what can be run locally, however I am very concerned at the part in bold above. It is true that the number of local devices is growing however the DTHs, last I checked, are very basic and generally do not cover all the features or parameters that the device supports. In other words, just like today, we either have to go with the basic DTH to stay local or go with the full featured DTH and forgo local execution. I suspect that higher end devices will continue to expand their feature-set so this problem is only bound to get bigger.

As an example, I purchased WD200+ dimmers from Homeseer that have 7 RGB leds that I can use for visual notifications. I love that feature, but as far as I know, the local DTH would turn it into a dumb smart dimmer so I have to use a custom DTH that prevents local execution.

Is this even being considered as an issue to be addressed? 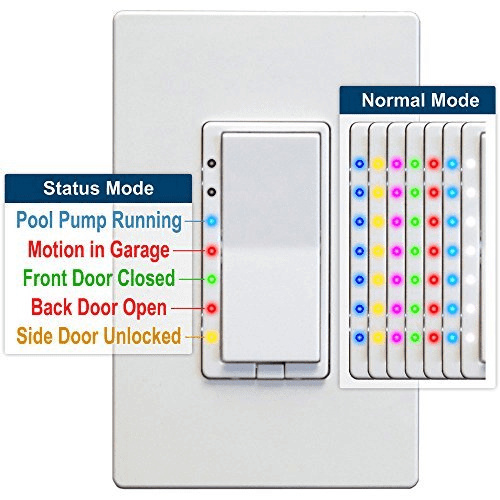 I don’t know if we will be able to find a solution for this, I think discussions could be had about ways around it. I can ask the WWST team about Homeseer.

If you would like to use the proof of concept of webCoRE using the Rules API, visit https://SDC.webcore.co Note that this site won’t be live forever since it’s a POC, and your automations using it will disappear. But if you like to tinker…

So i assume ill need to recreate all my webcore pistons on the rules api?

How long will WebCoRE be available Meta

Hey guys, first and foremost, I want to apologize for being very quiet lately. Or missing, at times. Work is hard, you know

Just wanted to bring a little light on things. As Ian mentioned, more things will be known after the SDC, but for now: SmartThings is developing a new Rules API which works in a very similar way to webCoRE - nested blocks allowing for complex rules. This is happening. Nested IFs, etc. ST did fork webCoRE and worked on making it work with the Rules API -…

reminder: the link I posted above is only a proof of concept and not a final product:

How long will WebCoRE be available Meta

It’s a fairly minimal version of webCoRE - lots of features missing, but it is a good start, meant as a proof of concept.

This makes me happy

I don’t know if we will be able to find a solution for this, I think discussions could be had about ways around it. I can ask the WWST team about Homeseer.

@ady624 - Homeseer was just an example, but I would not worry about them specifically as their device offering is limited and not very interesting. The only exception was the WD200+ dimmer due to the 7 RGB leds. Brands that tend to make devices with lots of features, as an example, are Aeotec, Fibaro, Innovelli, and likely many others.

Even basic plug in outlets seem to have power (W) reporting with no settings exposed if you use the ST DTH, however if you use a custom DTH, you can get Energy, and can set reporting options (at the very least). If ST is trying to limit users on the frequency of the reports to safeguard performance then ST could do so by limiting the fastest reporting but allowing slower reporting. I value those additional settings, and features so using the ST DTH which hides them is a big ‘NO GO’.

Nice to meet you @ady624 Thanks for the link @jkp

I’ve created one very simple piston for my bathroom fan using the POC webcore site. Obviously not going to move anything over to it since it is temporary. 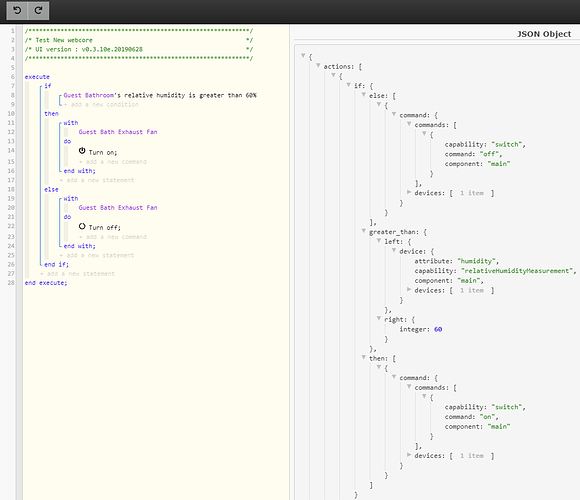 Was anyone able to record Adrian’s speech?
(either video or audio)

I think they will eventually be up on the Samsung Developers YouTube channel. I only have pics 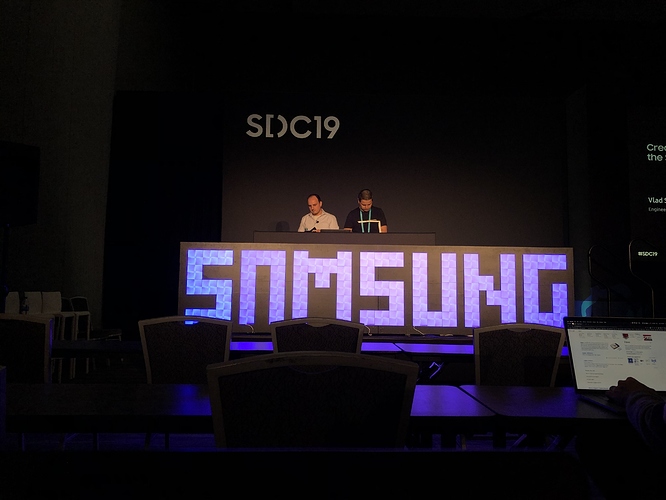 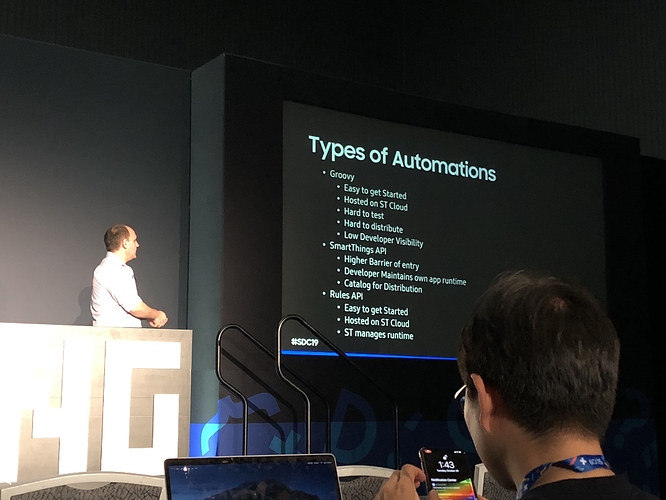 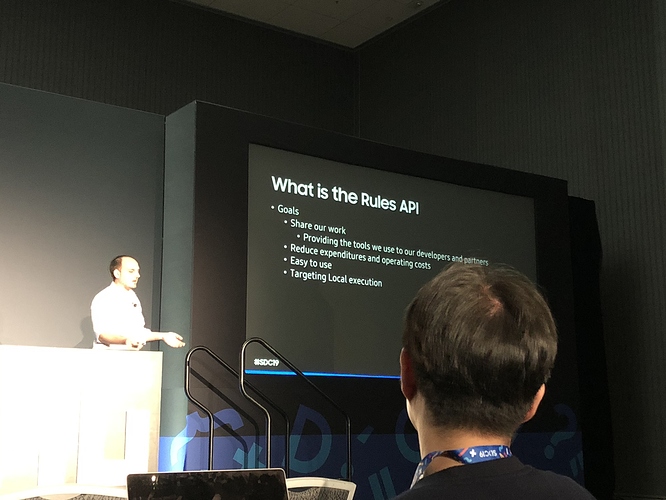 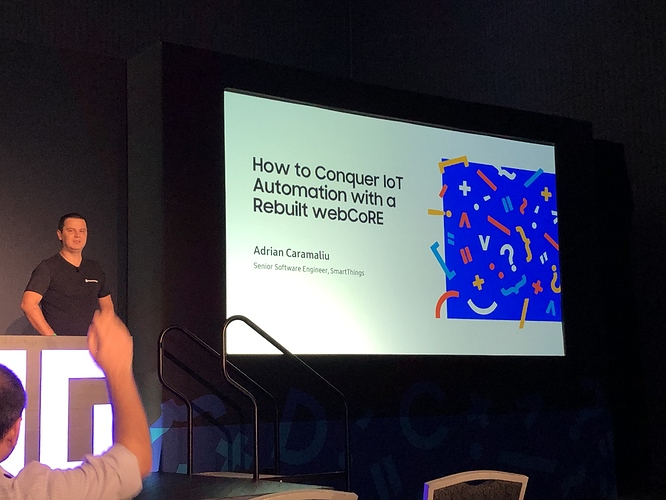 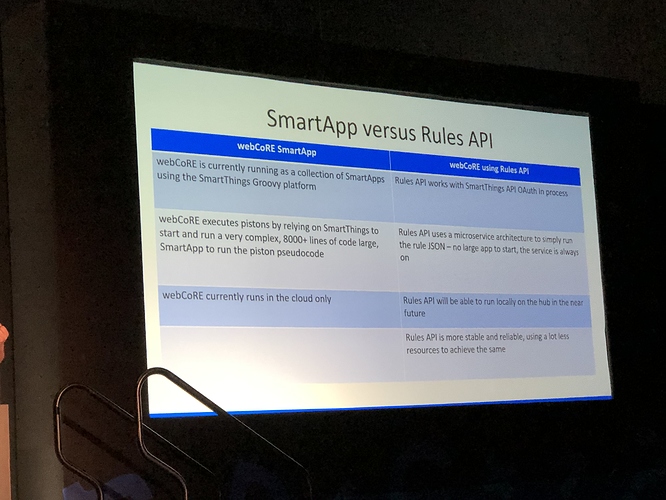 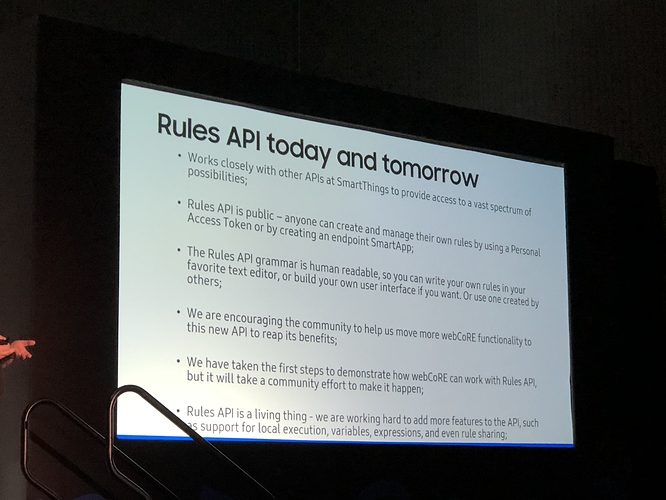 Did you notice a camera crew in the room during Adrian’s speech?

This line made me laugh…

How many other business models could get away with this? LOL

“We have taken the first steps to secure a building, but it is up to the community to stock the shelves, and program the cash register…”

I guess, in all fairness, with each companies devices having different capabilities, this direction makes sense… We’ve all seen how generic Device Handlers can often fall short.

yeah, everything was filmed. Sessuons from last years SDC were posted, so i would expect the same this year.

I have not been keeping up to date on the newer hubs but do we know which hubs can take advantage of this new Rules API? Hub 6.0?

Purely speculation, but I’d guess v2 and v3 for sure, SmartThings WiFi and Connect Home maybe, and everything else about 0% chance.

please who ever sees it first, share a link here…
GO WEBCORE!!!