Sorry, not ready yet

I get this message box anytime I go to move a piston. Any ideas?

FYI, I am trying to move pistons to another instance because I am assuming I am out of memory. Many of my global variables never update anymore. 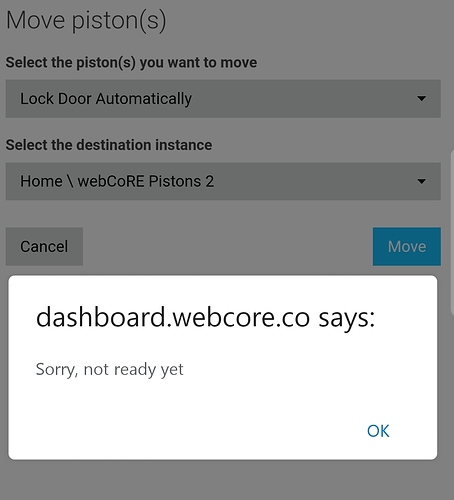 what happens if you switch to the other instance and try moving the piston there?

Last I heard, pistons cannot be moved that way. (hence, the alert)

For what it’s worth, I believe there is no more restriction requiring additional instances…
(It does not give you more memory)

Many of my global variables never update anymore.

This should be in a new topic, with green snapshots (Trace on) and a failed log set to Full for diagnose.

Yes, that was my workaround too. Thanks.

I was grasping at straws for the memory thing.
I will try to get some logs and start a new topic.
In ST app, webCore says only 38%

As far as I know, each piston is limited to 100KB, but there is no limit to how many pistons you may create. (I am currently up to 435 pistons at my house)

I am currently up to 435 pistons at my house

Holly smokes… And you wrote just 20-30 for my house…
Thanks man…(just kidding:)

Well, to be honest, only about 150 of my pistons are currently running… The other 300 are currently paused, and consists of projects I have created for clients, testing environments, and code snippets that I have saved for reference.

Well, just to close the loop here…
FYI, I deleted my other webcore instance and deleted the 3 super global variables I had and everything started working again. I don’t know if it was the other instance or the super globals or both.

The super globals were just used to sync other global values across instances, not used in my primary instance’s pistons. I had a sync’ing piston.

However, they were named the same as the originals, so maybe that was the problem. Like @IsAnyoneHome and @@IsAnyoneHome.

I stopped using super globals when I discovered about a 15% failure rate in other instances.
(although I still use them for non-changing data)