There are many feature requests out there so I attempted to find a common thread that connects a number of them, a feature that could be developed as an important building block for other improvements. The best balance between difficulty of implementation and applicability to feature requests seemed to be a new input type that would allow building out a key => value mapping, I’ll refer to it as “KV Input” in this post.

I have some of this feature implemented but need to gather requirements to ensure that it is flexible enough for all the situations where we would need to use it. This will not be finished soon, but I want to gauge interest and flesh out additional requirements.

The KV input accepts any number of key and value pairs, currently it looks like this: 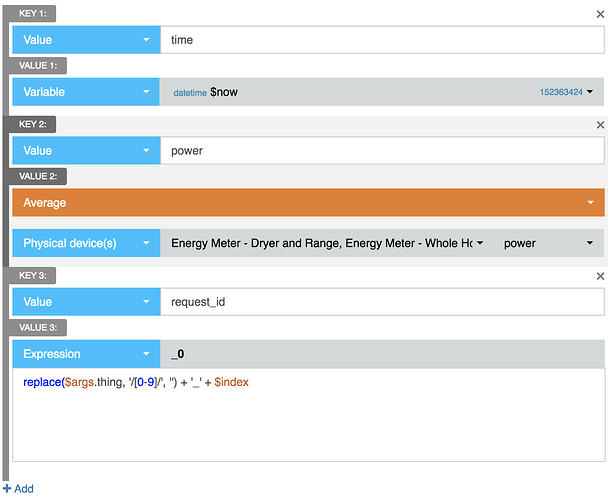 When evaluated this produces a data structure like the following:

This is a building block for several features; please reply if you think of any other places where this would be useful.

Passing arguments to a piston

Any changes to the request body should be approached in a way that does not preclude the ability to support a custom body (i.e. body as freeform text rather than key-value pairs).

I expect any field that accepts KV input to offer a choice of three input types: Key-value mapping, Variables by name, and List variable.

webCoRE already has the “variables” operand that allows you to select multiple variables where the variable name is used as the key to map each variable value. That may be somewhat obsolete but I don’t think it needs to go away. It is easier to keep it around for backwards compatibility than to automatically migrate those to the KV input and in some cases it may be more convenient. I will probably rename it to “Variables by name” to better confer that it generates a mapping.

List variables, while a bit tough to work with currently, can represent the same data that could be added in a KV input. It should be possible to select a single list variable as an alternative to the KV input.

KV input is a building block for solutions to the following:

@ady624: while i was in there doing the *CLEAR https://community.webcore.co/t/clearing-a-list/1345/11?u=bangali thought i might as well add a stuff method for lists. so, added a stuff method for use like this set variable lightNames[*ALL] = “0:light 1,1:light 2,2:light 3” which gives: lightNames = {“0”:“light 1”, “1”:“light 2”, “2”:“light 3”} seems to be working as desired. not sure if there might an unwanted side effect from replacing the entire variable value instead of just a single ind…

@ady624 i know you have presence on your mind and fingers right now which is awesome! but i was running in to the need for a way to clear list[] variables and also seen others on the forum asking about how to clear list. i added these 3 lines of code to webcore-piston and if i do set variable listName[*CLEAR] it seems to clear the list[] variable without any secondary issues … that i can tell.

1) Give a description of the problem Looking for a better(?) way to fill an array (list) 2) What is the expected behavior? The piston works as is but instead of filling the array (list) with the fixed data, I am calculating it during each piston run. 3) What is happening/not happening? Want more efficiency and how-to advice. 4) Post a Green Snapshot of the piston[image] [untitled] 5) Attach any logs (From ST IDE and by turning logging level to Full) Not needed for this discussion. I’m …

Hi, I have tried forking a creating an improved “Make a web request” action, but failing miserably

I did get my alternate version of webcore running, but the added vcmd was not found for some reason. Anyway, to me the “Make a web request” is today next to useless. I have multiple things that I would like to do, that is simply impossible with today’s action. Essentially what I would like is for me to be able to a) Define custom HTTP headers b) Use PATCH c) Send a custom body …

I’m struggling a bit troubleshooting the “Web Request” function in webCoRE. Specifically, I’m attempting to make a simple PUT submission to the Zoneminder API I have running on a local workstation. The curl equivalent is curl -XPUT http:servername/zm/api/monitors/1.json -d "Monitor[Enabled]=1". I’m setting a variable to capture the data payload, and more piston looks like the following: [image] Any thoughts? Even better - what’s the best way to troubleshot Web Requests? Tracing and Logging see…

A lot of this is over my head, and I have a hard time seeing where I would use it. But one weakness that I think this could address is the ability to make better JSON calls - specifically where there is a subvalue. Like the “params” value in this post:

1) Give a description of the problem Trying to create a simple piston that calls a REST API POST method with JSON body. The destination is a local IP address in my network for a Sony AV receiver. (API reference guide if needed: https://developer.sony.com/develop/audio-control-api/hardware-overview/api-references/svs/getplayingcontentinfo) But the JSON appears to be getting modified somehow. Is there a way to log the Web Request to see exactly what it’s sending? 2) What is the expected behav…

Once I understood (thanks to your assistance) of how to enter the list variables in a single line array, most of my issue was solved. What I really wanted was a multi-dimensional array, but, now that you’ve shown me the way to use the single-line array methods SmartThings webCoRE doesn’t really require that due to the normally limited volume of data used.

With that said, if your KV input method can make the setting initial array variables easier, I’m happy.

I am not sure if this is related… but I would love to be able to pass a string (short text) along with the number to my fuel streams… Right now, it automatically records the date & time, the canister, fuel stream name, and a number. It would be infinitely helpful if I could pass a string along with each “Write data point”

For example, in the pic below, 15 is actually ‘Overcast’, but there is no legend visible, so it relies on my memory of what each number means.

Here is a little snippet of code that I am using to draw this out:

Definitely I think there is benefit to a key-value input type – particularly with web requests which can require headers beyond the one “Authorization” header that is set by default. I have several APIs I’d like to leverage, but without passing my API key I am unable to use them.

I don’t have any additional use cases to add, but this would be very helpful for me!

I believe this would help me in getting information on a specific call where there are numerous Request Headers and Body. At the moment, i can use Postman to get it but don’t have much luck using WC. This is the cURL code:

This is for a fuel price check.

I would definitely like to add custom headers. I am currently unable to utilize a external API because of this.

Just adding my voice to others in support of custom headers for http requests. In my current use case, I need to set a specific custom header to authenticate against a BOND home remote transmitter to use its local API.

Just thought I’d add another voice to the rest in regards to custom headers. Would be nice to be able to make requests directly to my AC unit rather than going through tasker.

Another hand in the air for customer headers. Specifically looking for ‘x-api-key’ to use with AWS Gateway which does not support ‘Authorization’ header. I assume with the popularity of AWS this would be on others radar/wishlists.

I made a hack to allow for adding a custom header tag if you in a ‘:’ in the string. Update the ‘webCoRE Piston’ application at line 3282 to the following: 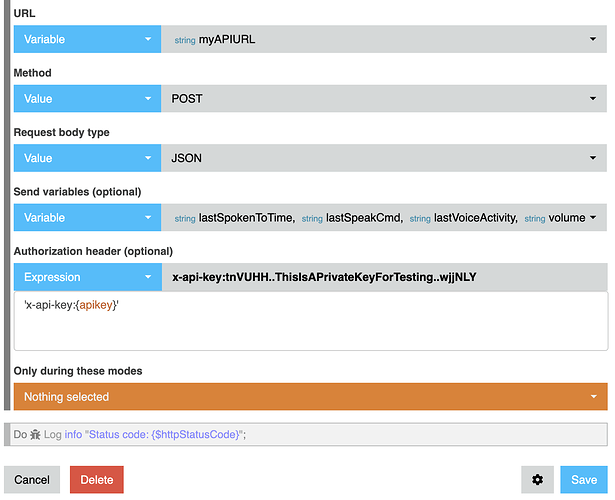 Sorry for multiple ‘to me’ replies, but after my initial headers hack determined that having more than one header entry addition would be beneficial in the future. This change will look for the colon ‘:’ and will then parse on a JSON object which requires double quotes to be used around keys and values to build a header map.

Change again is only at line 3282 in the ‘webCoRE Piston’ and is backward compatible: 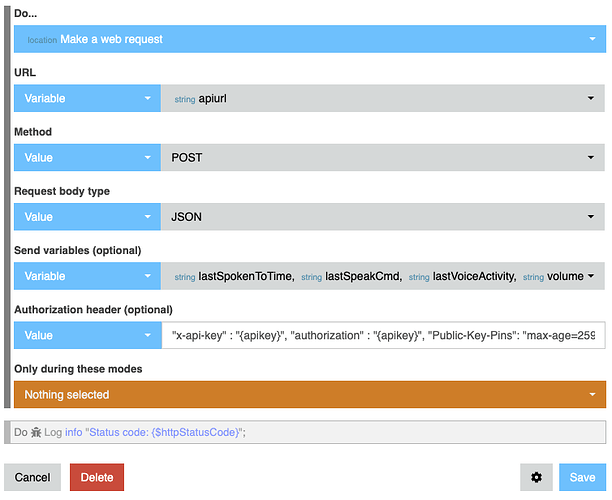 Which results in the following posted properly as shown:

Hello @Bloodtick_Jones
Just wanted to check if this hack will affect existing/working Webcore web-requests that already have an authorization header or would I need to re-write those pistons?
Thanks
Tim

Just wanted to check if this hack will affect existing/working Webcore web-requests that already have an authorization header or would I need to re-write those pistons?
Thanks
Tim

It should work as-is without re-write unless the existing authorization header has a colon “:” which I do not believe is possible since the authorization syntax uses base64 encoding for the (username:password) combination and the “:” is not available.

I check for the colon with “auth.contains(’:’)” statement and then look for the JSON object in the user field; otherwise it will use the original logic that just copies the information from the user field as “Authorization: {your input copied here}”; or if empty does nothing.

@Bloodtick_Jones
Thanks very much for this. Hack works for me. I finally have control of my ac unit directly from webcore so no need to go through tasker anymore. I can also confirm that this had no affect on existing webcore requests.
I’m new to hacking the changes in the webcore code so when it comes to updating webcore to a new version in the future how will I know which line of code to change?
Thanks again
Tim

I’m new to hacking the changes in the webcore code so when it comes to updating webcore to a new version in the future how will I know which line of code to change?

If you look at the SmartApps you will see now a magnifier has appeared. Click that and scan down and you will see the diff between the GitHub master branch and your change. I doubt if ady624 is in any hurry to refactor his code so the area should not change much. You can just left push this change and then overwrite the local version, save and then go back and publish.

I will create a branch and submit a pull request to the master and see if ady264 will accept it; so this would be part of the solution and a hack isn’t required. Great to hear it worked with your original authorization header pistons.

@Bloodtick_Jones
Yep all still working great. Thanks for the reply. The update seems like it will be straight forward enough.

I thought I replied to your pull request last week but I don’t see the reply on GitHub. Just a few tweaks then this can be pulled into webCoRE so that manual patching is not necessary.